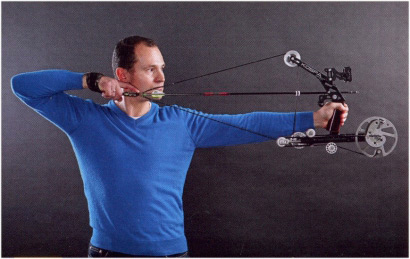 Inventor Bogdan Khmelnitski brought to our office his latest work -compact modular bow named “Kobra”. Traditionally bows made by Bogdan have three distinctive features. First, if we speak about convenience, speed of the arrow and accuracy of shooting his bows are highly competitive with the best sports implements of traditional design. Secondly, one can easily place this bow in a brief case. And last thing is that exotic power accumulators are used as a tensioner instead of standard flexible shoulders, in this very case gaz strut.

The inventor explains his exotic hobby in a quite simple way. In his childhood, as all his fellow kids, he used to playing with elastic thread attached to a stick. Then he got interested in sport shooting, and he has been doing this for 20 years now. He tested different bows, including classic “Olympic”, in between elaborating his professional skill of metal working. Bogdan was lucky with his job as they allowed him to practice archery during lunch time. However the premises were confined and it was inconvenient to do practice with “Olympic”. That is when an idea of creation of compact sport implement came into his mind.

In his first prototypes he used rubber threads. The result was not bad though rubber showed bad performance in low temperatures as it stretched and cracked. The bow named “Phantom” used the energy of coiled string from air rifle and showed good results. A year ago Bogdan decided to test gaz strut, which is light and do not require starting force. Now you can see the result.

Frame of “Kobra” is made of high quality steel with the help of argon welding and can stand with loads. The weight of bow is 2 kg without sighting unit and shelf. The quality of manufacturing of this weapon is associated with the highest industrial technologies. 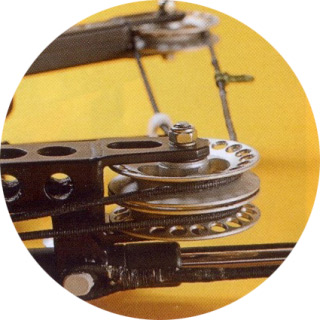 Guiding rowlers are made of aluminum alloy (Д-16Т -russian identification) with the help of lathe tool. Pulley is also made on lathe tool, and processed on milling machine. Pulley has two windows for lowering of weight and also there are two buttons for fixing the bowstring. Unit is molded with epoxide resin and glassfiber. 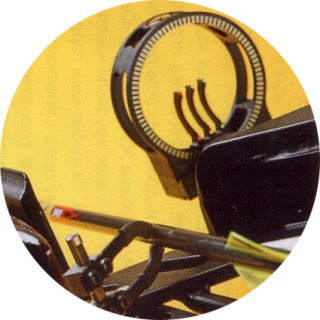 Shelf for arrow and sighting unit are the only purchased elements for “Kobra”. Hunting sight points out that this compact bow can be used not only for sport but also for hunting. Three fore sights of different scales are aimed at shooting from various ranges.

“Kobra” has two bowstrings: major – the one which speeds up the arrow and power bowstring, which connects unit with gaz strut.

The bow is made up based on single module structure — both ends of main bowstring lie down in broad track of a single module. When a shooter stretches a bow, module turn 360 degrees (against 180-200 degrees as majority of bows). This allows to make the diameter of module still smaller. 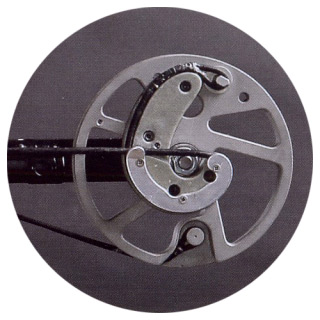 The radius of rotation of module is also 360 degrees. This module is a complex component with spiraled track and support where power bowstring is placed. Module in the form of sheave defines the bowstring load conditions. At the beginning of stretching its radius is great and strength on major bowstring is maximum. While stretching force decreases. Thanks to spiraled track bowstring crosses with itself and lays on support. At this moment force decreases for 2 kg and bow is fixed in loaded state, but this is not the main thing. More important is that the force in bowstring after a shot increases all the time and arrow receives speed up during a long period of time. That is why modular bows produce greater speed for the arrow at equal force in comparison with classical bows. 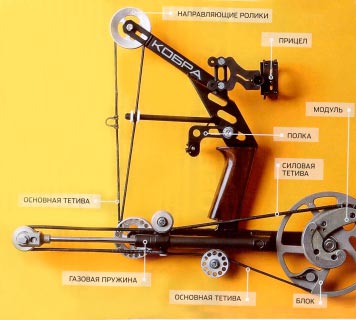 Quite a different task is to define where is the main bowstring. The answer is simple: both its ends are fixed of one of the button of module, coiled in one direction, placed in broad track close to, like a string folded into halves. Together they pass through two guiding rowlers and only after that their ways are separated: one goes to upper rowler through diversion made of fluorine plastic (plain element of a white color which takes away bowstring from line of sighting), and other one obey steady hand of an archer guides the arrow into the target.

Limbs of a classic bow work under the same physical principle as a string: the greater the bent the bigger force it produces. It means the bigger is the stretch of a bowstring the greater effect it gives. If force is not equal the sighting will be difficult and speed of the arrow will be slow, because the arrow gets energy in the form of short impulse during the shot, and after that strength on bowstring quickly decreases.

In the course of fight for uniform stretching the Japanese constructed their bows of 2.5 meters size (Yumi) with minimum curve of very strong limbs. And Bogdan Khmelnitski chose gaz strut as a tensioner for his “Kobra” which at the very beginning of its spring produces 75% of strength. Maximum strength of the spring — 50 kg, and minimum is about 40 kg. Using the module of variable radius the inventor develops as good features of the spring up to ideal: at the beginning of stretching (after small initial spring return within some centimeter) strength on bowstring goes up to 22 kg, and by the end of spring decreases up to 20 kg. After the shot the arrow continuously speeds up all, and as a result it achieves the speed of 85 km/h — and that is a well-deserved objective for a sport modular device. 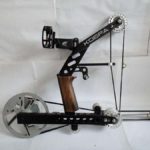 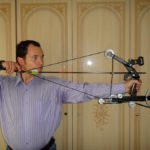 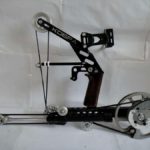 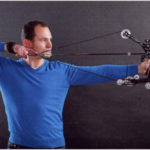 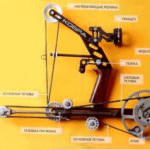 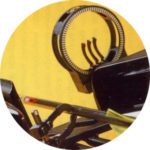 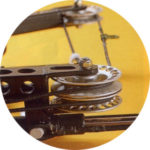 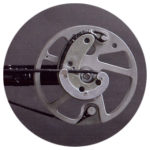