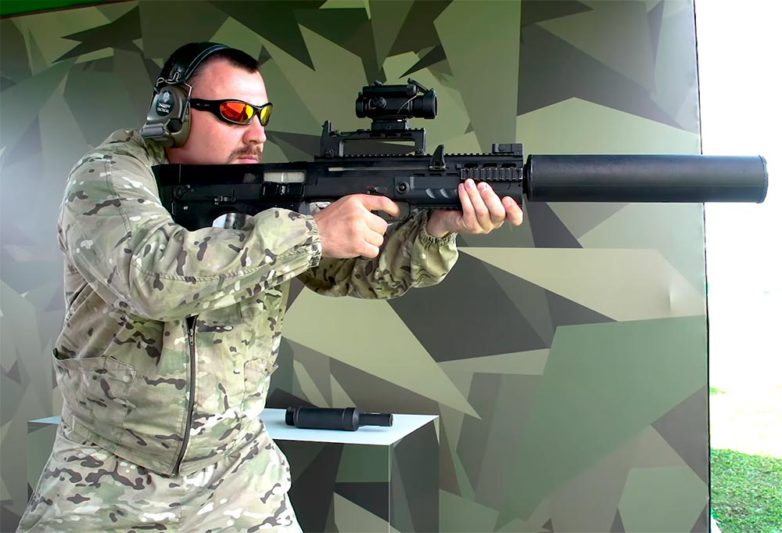 Is there a firearm that can hit an enemy hiding behind a building wall or an armored sheet, or makes it possible to safely take out a terrorist pumped with anesthetizing psychotropic drugs, all in automatic firing mode? Yes, there is! Allow us to introduce the automatic assault rifle ShAK-12, which is used by Russian Special Forces.

In its issue as of May, 2016, “PM” newspaper wrote about the unique creation of Russian gunsmiths from the Tula Instrument Design Bureau – a special large-caliber sniper rifle VSSK “Vykhlop”. This weapon has a number of properties that, when combined within the single model, present a combatant with a deadly instrument that has no analogues.

Powerful and yet silent rifle is able to hit enemies protected by high-class armor. It is not surprising that this model received a logical extension, but within a different class of weapons. We are talking about ShAK-12 – 12.7 mm large-caliber assault rifle system.

Born from a tragic experience

Assault rifle ASh-12 – the “heart” of the new model – was kept in secret for a long period of time. It was only presented to the general public in 2017 at the Interpolitex exhibition in Moscow. This is a large-caliber, fully automatic weapon capable of firing heavy 12.7×55 mm rounds in both single and fully automatic fire modes at ranges of 200-400 m.

When the information about this product leaked into open sources, it was conventionally dubbed an automatic version of the VSSK “Vykhlop”, which, to put it mildly, is incorrect. Indeed, when creating it, the VSSK design was adopted: for example, it uses the same bullet shell of 12.7×55 mm, the same bullpup configuration, and even looks a bit like the rifle, but this is as far as the similarity goes, while the difference is huge! To begin with, the VSSK was a non-automatic bolt-action sniper rifle, and ShAK-12 is an automatic assault rifle with a completely different principle of operation.

What actually makes them so closely connected is the fact that they were created as a single weapon system commissioned by the Special Operations Center of the Russian Federal Security Service. The technical design specification for these models was created after the terrorist attack on School #1 in Beslan took place, according to Nikolai Komarov, the Head of the department of Central Design and Research Bureau for Sporting and Hunting Weapons (branch of “KBP” JSC). The Special Forces, based on the experience of this operation, wanted to obtain weapons capable of hitting an enemy that was protected by heavy armor or took cover behind an obstacle. In addition to high penetrating power, the new model was required to have a high stopping power.

First of all, ShAK-12 is a whole system, which, in addition to the large-caliber assault rifle ASh-12, includes ammunition and various weapon accessories. Let’s start with ammunition. Unlike in VSSK “Vykhlop”, in ShAK-12 the 12.7×55 mm shell received a slightly different filling. Bullets for the assault rifle are shorter and have a blunter tip: this is necessary to achieve a better stopping effect. To date, we know of three different types of bullets. The first type has a steel core inside and is designed to take out targets protected by some armor or hiding behind an obstacle. According to some reports, such a bullet is able to penetrate through a sheet of steel as thick as 16 mm or a class-5 bulletproof vest. The second type of ammunition has a heavy lead bullet with subsonic speed and is designed for silent shooting while using a silencer. The third type of ammunition is a shell with a light aluminum bullet, which has expansive action and provides an increased stopping effect. It is this type of bullets that should take out fighters that are under the influence of drugs or some powerful psychotropic substances that increase their pain threshold. It’s not a secret that some terrorists practice the use of drugs, due to which their physical capabilities improve, and the body becomes insensitive to pain even when taking critical damage. There are known cases when drugged militants took several 5.45 or 7.62 bullets to the torso and still continued to fight for 20-30 minutes until dying of blood loss. The stopping effect of intermediate assault rifle rounds is not always sufficient, and sometimes a bullet can simply pierce the body. The creators of the large-caliber 12.7×55 mm ammunition solved this problem in their own way. The bullet has a large surface and, when accelerated by a massive charge of gunpowder, transmits into a body the energy so powerful that the target is simply knocked down. Moreover, this type of ammunition also has an expansive effect that increases the area of application of energy, reinforcing the stopping effect by many times. 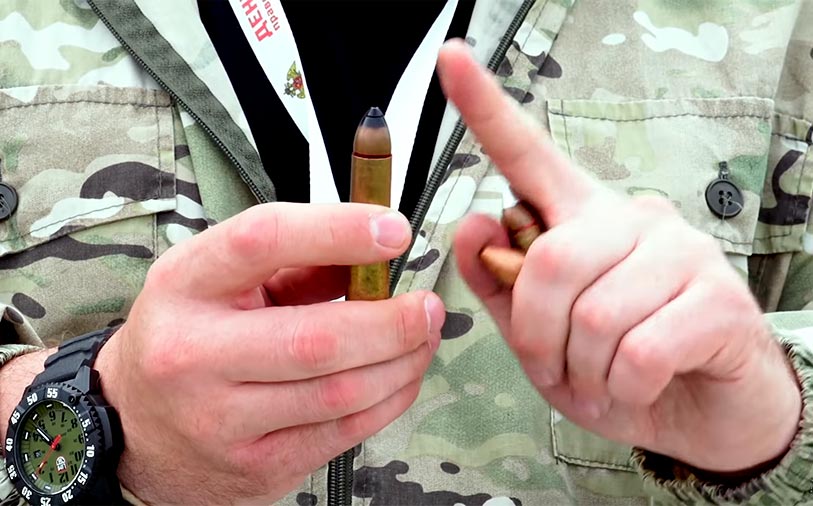 Despite utilizing powerful ammunition, ShAK-12 allows to comfortably fire in bursts, even from standing position with the weapon unsupported. 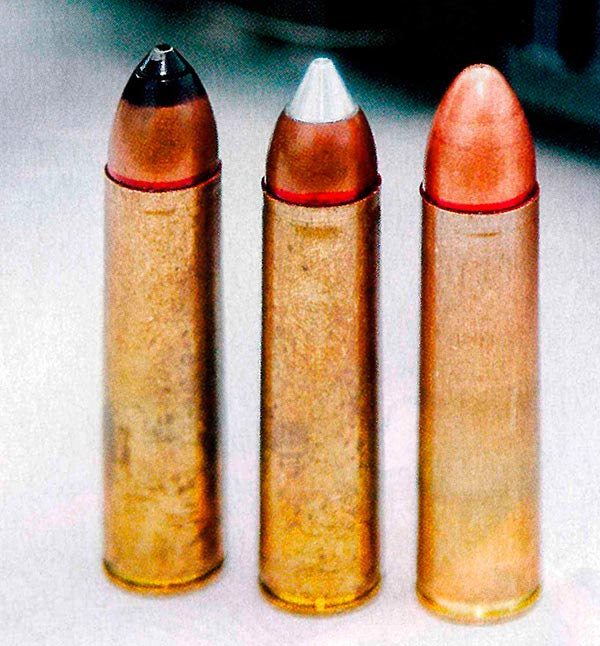 ShAK-12 ammunition
From left to right: with a heat-strengthened steel core (armor-piercing); with a light aluminum bullet with anti-ricochet effect (expansive); with a heavy lead bullet with subsonic speed (noiseless).

ShAK-12 rounds are equipped in plastic single-row clips with a capacity of 10 or 20. Different types of ammunition and the different nature of the tasks involved imply the use of various muzzle devices supported by the ShAK-12 system. There are four types of such devices, varying in size and functionality. The most compact ones perform the function of a flame suppressor or a tactical silencer and provide insignificant damping of the sound and flash to a level that hinders the visual and acoustic determination of the combatant’s location. Such devices are advisable to use when conducting assault operations in confined spaces. The largest muzzle devices carry out a function of a full-fledged silent shooting device, they are used together with subsonic rounds in situations where a combatant is not restricted by confined spaces and the task requires secretive work, including in night conditions. Shooting from ASh-12 automatic assault rifle, if necessary, can also be performed without any muzzle devices, but, of course, in that case, the roar and the flash will be enormous!

Moreover, it was the use of ammunition with such different functional capabilities that dictated a rather unusual design scheme for ShAK-12 assault rifle. The most common design scheme adopted in assault rifles and used throughout the world, is the diversion of powder gases to the piston in the gas offtake. But this design did not provide stable work with ammunition with different energy properties. Therefore, the creators of the assault rifle had to look for other technical solutions. As a result of the conducted studies, it was concluded that the optimal design scheme would be an automatic system with the use of recoil energy with short barrel recoil. A fairly nontrivial move, considering that this is typical for short arms that utilize pistol rounds. However, it was this technical solution that allowed to ensure the stable operation of the model.

In order to create the large-caliber automatic assault rifle to be as compact and light as possible, the designers, as in the case of the VSSK “Vykhlop”, involved a bullpop configuration, in which the magazine is located behind the fire control handle, not in front of it. Thanks to this, ASh-12 has a length of only 675 mm and a weight of 5.2 kg – which, for a weapon of such caliber, is very modest.

To facilitate the weight, most of the assault rifle’s frame is made of impact-resistant polymer, the rest of the parts are made of aluminum. ASh-12 has four Picatinny rails. The longest one, which is made of steel, is on top and can be used to mount aiming devices or a carrying handle.

After the publication of the first pieces of information about ShAK-12, many “experts” strongly stated that the assault rifle of such caliber will have overwhelmingly powerful recoil. The author of this text, as a man who fired ShAK-12, can surely state that it has recoil no stronger than that of a conventional military SVD rifle or a 7.62×54 PKM machine gun.

The ShAK-12 automatic assault rifle is one of the few weapons that can fire heavy 12.7 mm rounds in the automatic fire mode. The idea of such ammunition is not new – US .50 Beowulf and .450 Bushmaster rounds have already been produced for the modernized versions of AR-15 carbines. But even these “elephant gun” rounds have a shorter bullet length, smaller hinge of gunpowder, and their range limit is somewhere around 180 m, while for 12.7×55 rounds this is the average working distance at which the bullet retains all its ballistic properties. Unlike the Russian model, the weapons that utilize the aforementioned US ammunition are not suitable for performing combat missions and are only used for sports or hunting.