The history of russian biathlon rifles began in 1958, when Soviet athletes went to the first world championship in Austria with the Mosin rifle which had already proved itself in two world wars.

Some historical facts. As a sport biathlon owes its begining to military men, primarily the Norwegian, who had already been training cross-country skiing and shooting with service rifles in the 19th century. As an Olympic sport biathlon made its debut in 1924, though at that time it was called «Military patrol competitions». But it was not until the second half of the 20th century that biathlon began to attract a real mass interest. After the Second World War, biathlon began to gain popularity in the USSR.

At that time, biathlon was different from the sport that we are used to today. Apart from the fact that athletes shot with real or a bit modified military rifles, the shooting was at the range of 100 to 250 meters and with live ammunition.

As it was said at the beginning of this article, Soviet athletes went to the first competitions with Mosin rifles and lost the contest. However, the loss gave a serious impulse to the USSR and in 1959 Soviet athletes had already received a special rifle for biathlon named Bi-59, designed at the enterprise Izhmash by design-engineer Shestryakov. The same time-tested Mosin rifle became the basis for the first Soviet biathlon rifle, but with a new barrel, a modified stock, a dioptrical sight with a protective pouch. With the new biathlon rifle, Soviet athletes achieved their first success — Soviet biathlete Alexander Privalov won a bronze medal at the Squaw Valley (California, USA). Several dozen Bi-59 rifles were produced.

In 1961, the Soviet national team received a new biathlon rifle «Bi-7.62» (7.62 stands for the caliber of the rifle), which had already great experience performing at various competitions. The rifle received a cover to protect the bore from snow and dirt, as well as one to protect diopter sight. The Bi-59 and Bi-7.62 rifles Soviet athletes used in completion until the end of the 1970s. 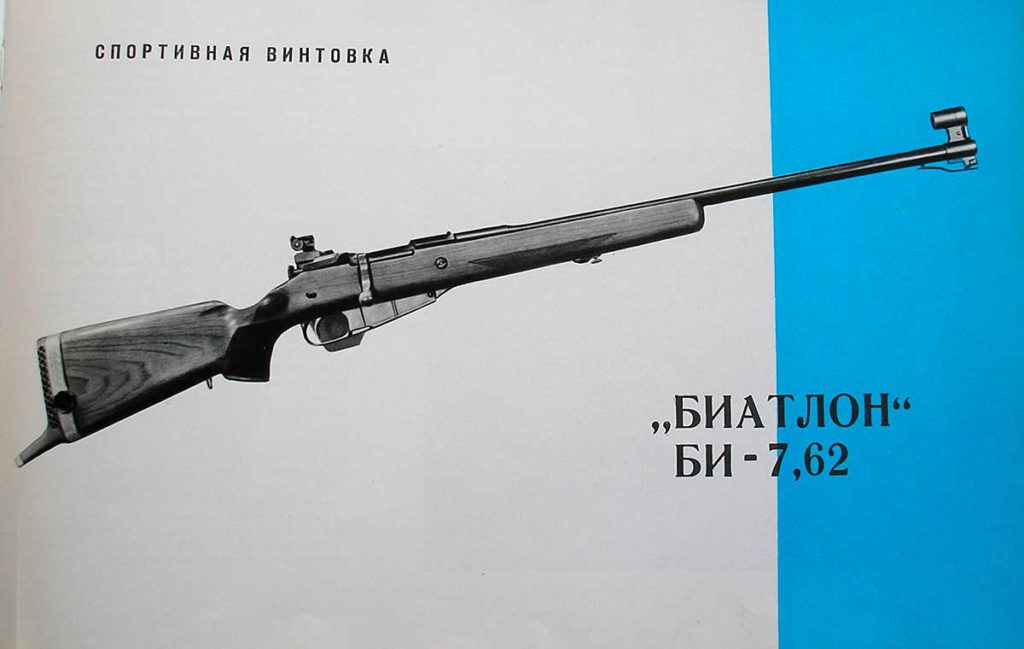 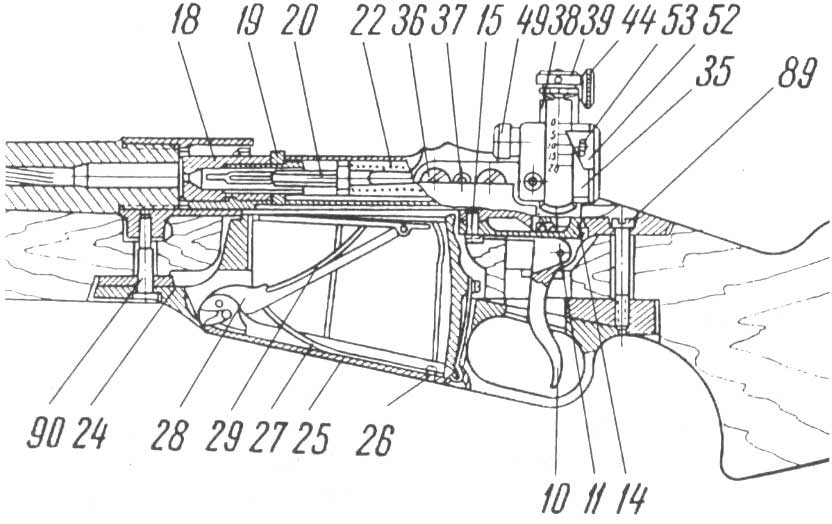 Soviet gunmakers made correct estimations as of the direction in which biathlon rifles would be improved, as in 1978 the biathlon revolution broke out. To increase the attractiveness of biathlon and its audience appeal, it was decided to reduce the shooting distance to 50 meters, so that the audience could see the target. The reduction of the shooting distance led to the fact that there was no need for powerful ammunition, and respectively, it was required to use biathlon rifles with a small-caliber rim-fire cartridge .22LR (5.6 x15 mm).

The appearance of new rifles didn’t stop the progress in sports weapon improvement. Aiming to reduce weight of the rifle and recoil, Soviet gunmakers relied on a reduction in caliber. As a result, Bi-6,5 and BiL-6,5 rifles (the latter was created on the basis of the hunting carbine «Los»(Moose)) appeared. And in 1976 in the range of Izhmash sport weapons a rifle with a bolt of its own design with an accelerated reloading of 5.6 mm caliber appeared.

Thanks to the efforts of Soviet gunmakers, athletes went to the 1980 Olympics to Lake Placid (New York, USA) with a Bi-7-2 rifle equipped with a crank slide bolt. This bolt is also used today in Izhevsk sport rifles and some hunting rifles.

Izhmash biathlon rifles were the main weapon of the Soviet national team until the early 1990s, but with the beginning of the 90s the situation took a sharp turn. The country and Izhmash were going through hard times. The quality of the rifles dropped, and the development of new weapons practically reduced to nothing. If earlier every soviet team included an Izhmash gunmaker who quickly solved problems with rifles and considered athletes’ requests and then introduced these changes into rifle designs, now the athletes could not afford to keep a gunmaker. They began to buy Austrian Anschutz biathlon rifles and even Izhmash began to produce rifles BI-7-4A with Anschutz barrels.

As of today, the situation with Russian biathlon rifles has improved. Izhmash has modernized the machines and the Russian national team again includes an engineer-gunmaker.

It should be said that biathlon rifles are expensive weapons that are manufactured individually. The sportsman himself chooses a wood type for making a stock; handles, butt, rests and are specially made for the anatomical features of the athlete. The wishes of high-level athletes are often embodied both in their personal weapons and in the basic rifle designs.

The main competitor of Russian biathlon rifles is the Austrian company Anschutz. Anschutz and Izhmash rifles are primarily distinguished by the bolt locking methods. The Russian rifle has a usual bolt, but to move it you need to use the circular movement of the handle, and in the Austrian rifle the locking is carried out with the help of 6 balls that are in the grooves located around the circumference of the bolt and when locked they enter into the joggles of the boltway.

There are also technological differences: the barrels for Russian rifles are made by the method of rotational forging on a mandrel, and the barrels of Austrian rifles are produced by drawing a punch through a pre-drilled and polished blank.

The main advantage of Russian biathlon rifles is their price. Bi-7-4 biathlon rifle is about twice as inexpensivs as the Austrian Anschutz-Fortner 1827. You can buy the Bi-7-4 not only in Russia, but also abroad. There are a few companies abroad that sell Russian rifles and modernize them at customers’ request. Bi-7-4 is an ideal rifle to prepare sportsmen of an entry level to develop further grows into elite athletes.